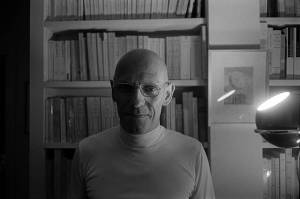 “Well, do you think I have worked all those years to say the same thing and not be changed?” –Michel Foucault

Michel Foucault was born on October 15, 1926 in Poitiers, France. He was the second of three children of a middle-class family with an older sister and younger brother. Paul Foucault, his father, was an eminent local surgeon who wanted his son to also enter the medical profession; both of Foucault’s grandfathers were also doctors. His mother, Anne Foucault, née Malapert, played an active role in Foucault’s early education. After graduating from the Saint-Stanislas school, he entered the prestigious lycée Henri IV in Paris. In 1946, he was admitted to the École Normale Supèriéure as the fourth highest ranked student.

Foucault emerged as a brilliant young thinker while studying philosophy with the distinguished Maurice Merleau-Ponty. He received his license in philosophy in 1948, in psychology in 1950, and was awarded a diploma in psychopathology in 1952.  In the 1950s, Foucault read the works of the German philosophers Heidegger and Nietzsche which had a significant impact on his later work.

Foucault held teaching positions from 1954 to 1958, teaching French at the universities of Uppsala, Warsaw, and Hamburg. He received his doctorat d’état in 1959 under the supervision of Georges Canguilhem who is one of the most important twentieth century French philosophers in the philosophy of science. His doctoral thesis was published two years later with the title Madness and Unreason: A History of Madness in the Classical Age (Folie et déraison: Histoire de la folie ý l’âge classique). In this text, Foucault destroys the traditional separation of madness and reason into universally objective categories. He does this by revealing how the distinction between madness and sanity is a historical construct, an invention of the Age of Reason. His reading of Descartes’ First Meditation led Foucault to accuse Descartes of being able to doubt everything except his own sanity, thus excluding madness from hyperbolic doubt.

In that same year, Foucault met Daniel Defert, a philosophy student ten years his junior. Defert’s political activism exercised a major influence on Foucault’s development. About their relationship, Foucault said in a 1981 interview: “I have lived in for 18 years in a state of passion toward someone. At some moments, this passion has taken the form of love. But in truth, it is a matter of a state of passion between the two of us.” Foucault and Defert were to have an intimate relationship for 25 years.

In 1963, Foucault published The Birth of the Clinic (Naissance de la clinique: Une archéologie du regard medical), which concerns the possibilities for the conditions of modern medical experience: an archaeology of medical discourse. In the preface, Foucault states that it is about the act of seeing, about THE gaze, and, more specifically, about the medical gaze. Foucault was later to criticize this work for its use of that term because it suggested the unifying function of a subject.

The Order of Things (Les Mots et les choses) was published in 1966 and became a surprise bestseller in France, making Foucault a household name in France. It is a comparative study of the development of economics, the natural sciences and linguistics in the 18th and 19th centuries and can be described as the first postmodern history of ideas. It contained Foucault’s infamous and much quoted opinion that the idea of “man” was a recent discursive formation that was nearing its end and that soon “man” would be “erased, like a face drawn in the sand at the edge of the sea.” Foucault’s intellectual predecessor Nietzsche had announced the death of God; Foucault now announced the death of man.

Foucault joined Defert in Tunisia from 1966 to 1968 when the latter went there to fulfill his volunteer service requirements. Most of Foucault’s time in Tunisia was spent writing his next major work, The Archaeology of Knowledge (L’Archéologie de Savior). During this period, Tunisia was racked by serious political violence and demonstrations aimed primarily at Israel. This experience had an effect on Foucault’s work and thought.

On his return to Paris in 1968, Foucault was asked to head the philosophy department at the University of Paris VIII in Vincennes, which was a new, experimental institution of higher learning. This coincided with the student revolts of 1968, which combined with his experiences in Tunisia, led Foucault to reflect on his political activities. In that year he joined with other intellectuals to form the Prison Information Group (Groupe d’Information sur les Prisons), an organization which was not an advocacy group per se, but rather an attempt to provide prisoners with a means of communicating about their concerns as prisoners.

The Archaeology of Knowledge was published in 1969. In this seminal work, Foucault analyzed the formation and use of discourse and his concept of the statement and its relationship to discourse. He argued that in addition to the classical unities of the existing human sciences, there are discursive unities that underlie them and are often not evident. Foucault’s project was to historically and theoretically analyze these discourses within the context of specific historical practices.

In 1970 Foucault was elected to the Collège de France, the country’s most eminent institution of research and learning, as professor of the history of systems of thought, a title that he had conceived himself.

Foucault’s primary interest is the critical history of the present. In his early works he refers to this as archaeology, while in his later work the term genealogy is used. His epistemological studies analyze the changing frameworks of the production of knowledge through the history of practices such as science, philosophy, art and literature. In his later genealogical analyses he argues that institutional power intrinsically linked with knowledge forms individual human “subjects” and then subjects them to disciplinary norms and standards. These norms have no basis in an absolute or transcendent truth, but rather are produced historically. He examines the “abnormal” human subject as an object-of-knowledge of the discourses of human and empirical sciences such as psychiatry, medicine and criminology.

Discipline and Punish: The Origin of the Prison (Surveiller et punir: Naissance de la prison), perhaps his most influential book, was published in 1975. With this book, his work begins to focus on the technology of power. He rejects the Enlightenment’s philosophical and juridical construction of power as conceptualized in relationship to representative government using it to insidiously establish a pervasive form of power. He examines power in relationship to both knowledge and the physical body, focusing on what he sees as the coercive technologies of control over it. Similar to his work in History of Madness, Foucault links the birth of the modern prison in the 19th century to a history of institutions. He argues that these institutions, including the army, the factory and the school, disciplines bodies thorough surveillance techniques that can be either real or merely assumed to exist by the subject. He maps the emergence of a disciplinary society and its new articulation of power by analyzing the nineteenth century English utilitarian thinker Jeremy Bentham’s infamous prison design, the Panopticon. This design allows for the invisible surveillance of prisoners, eventually resulting in the prisoners assuming that they are under constant surveillance regardless of whether or not they actually are. This “internalization” of the perception of being watched has a profound and coercive effect on behavior. The prison then becomes a tool of knowledge for the institutional formation of subjects inextricably linking power and knowledge.

Foucault’s reputation grew in the 1970s and 1980s and he lectured throughout the world. During this time, he began work on the multi-volume History of Sexuality (Historie de la Sexualité), a project he never completed. The first volume was published in 1974 was subtitled An Introduction (La Volonté de savior), and the second and third volumes entitled The Uses of Pleasure (L’Usage des Plaisirs) and Care of the Self (La Souci de Soi) were both published in 1984 shortly before his death. In these books, Foucault relates the Western subject’s understanding of the self as a sexual being to moral and ethical constructs, tracing the history of the construction of the subjectivity through the analysis of specific texts. In The Uses of Pleasure, he analyzes sexual pleasure in the ancient Greek social system as a play of power in social relations; ethical sexual behavior is determined by the practice of sex within a specific social and class position. This contrasts with the Christian tradition where pleasure is linked with transgression and illicit conduct. In Care of the Self, Foucault further investigates the ancient Greco-Roman systems of rules that were applied to sexual and other forms of social conduct. He analyses how the rules of self-control allow access to specific forms of pleasure and truth. Excess is the danger for the most of the Greco-Roman traditions, which Foucault notes is very different from the Christian concept of sin.

In his later work, Foucault investigates a system of control not recognized or understood by traditional concepts of political and social authority. He refers to these systems as bio-power. Bio-power can be best understood as the prerogative of the state to “let live and make die.” This unique view of the lives of social subjects is a way of understanding power in Western society. The aim of much of his later work was to reveal the structures of bio-power to enable individuals to better understand the assumptions and beliefs they have about themselves in terms of what is normal or abnormal or what is right and wrong. Foucault believed that this understanding would better enable individuals to care for themselves and others and to become creative.

Foucault once wrote, “We have to understand that with our desires, through our desires, go new forms of relationships, new forms of love, new forms of creation. Sex is not a fatality; it’s a possibility for creative life.” Though his later work focused on sex, his methods can be applied to virtually all aspects of life.

In addition to the works mentioned above, Foucault gave numerous lectures and interviews. Many of these have or are shortly to be transcribed and translated. This growing body of work shows the life of a political and personal philosopher who is vitally concerned with the understanding and transformation of constellations of power, knowledge and truth.

Foucault died in Paris from an AIDS-related illness on June 25, 1984.